Thiên Mụ Pagoda (Vietnamese: Chùa Thiên Mụ; also called Linh Mụ,") is a historic temple in the city of Hue and one of Vietnam Popular Destinations. Its pagoda has seven stories and is the tallest in Vietnam. The temple is often the subject of folk rhymes and Ca Dao about Hue; such is its iconic status and association with the city. It is regarded as the unofficial symbol of the former imperial capital.

The pagoda sits on the Hà Khê hill, in the ward of Hương Long in Huế. It is around 3 km of the Citadel of Hue constructed by the Nguyễn Dynasty and sits on the northern bank of the poetic river - Perfume River.

Coming to one of Vietnam Popular Destinations like this place, tourists in Vietnam travel will hear its history and interesting legend. The temple was built in 1601 at the direction of NguyễnHoàng, the head of the Nguyễn Lords. At the time, Hoang was the governor of the province of Thuận Hóa (now known as Huế) and although he nominally swore loyalty to the Lê Dynasty in Hanoi, he effectively ruled an independent state in modern day central Vietnam.
According to the royal annals, Hoang was on a sightseeing trip and holiday to see the seas and mountains of the local area when he passed by the hill which is now the site of the Thien Mu Pagoda. He heard of a local legend, in which an old lady, known as Thiên Mụ (literally "fairy woman"), wearing a red shirt and blue trousers, sat at the site, rubbing her cheeks. She said that a lord would come to the hill and erect a pagoda to pray for the country' prosperity. According to the local legend, the lady vanished after making her prophecy. When Hoang heard this, he ordered the construction of a temple at the site and it was called Thiên Mụ Tự.

Tourists in Vietnam travel admire about its architecture, because it's wonderful architectural pagoda in the area of Hue. The initial temple was very simply constructed, but over time it was redeveloped and expanded with more intricate features. In 1665, an expansion was undertaken under the reign of the Nguyễn Lord, Nguyễn Phúc Tần. 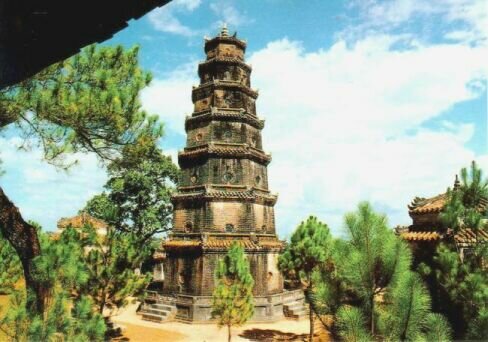 During the 19th century, the pagoda was patronized by the emperors of the Nguyễn Dynasty, which was founded in 1802 by Emperor Gia Long after his unification of modern Vietnam. His successor Minh Mạng funded further expansion and renovation of the temple.

Emperor Thiệu Trị, who succeeded Minh Mạng, erected the Từ Nhân Tower in 1844, which is now known as the Phước Duyên tower. The brick tower stands 21 m and is of octagonal shape and has seven stories, each of which is dedicated to a different Buddha. The tower has stood there since, overlooking the Perfume River, and has become synonymous with the landscape of Hue and the Perfume River. Its impact is such that it has become the unofficial symbol of the city.

The temple also contains a statue of a large marble turtle, a symbol of longevity. Beside the tower on either side are structures that record the architectural history of the tower, as well as various poems composed by Thiệu Trị.The pagoda and its buildings were severely damaged in a cyclone in 1904. Emperor Thanh Thai authorized reconstructions in 1907 and it has continued to the currentday, although it was still substantially less grand and expansive as its halcyon days of the Nguyễn Dynasty before the storm.Today, a tourist facility is also present among the gardens and grounds of the temple, and a stupa has been erected in honor of Monk Thích Ðôn Hậu, the abbot the pagoda during its reconstruction phase in the 20th century. His holy body is entombed in the stupa, which is a garden of pine trees.In the main hall, there is a statues of Gautama Buddha, flanked by Bodhisattva Văn Thù Sư Lợi and Bodhisattva Phổ Hiền.

During the summer of 1963, Thien Mu Pagoda, like many in South Vietnam, became a hotbed of anti-government protest. South Vietnam's Buddhist majority had long been discontented with the rule of President Ngo Dinh Diem since his rise to power in 1955. Diem had shown strong favoritism towards Catholics and discrimination against Buddhists in the army, public service and distribution of government aid. Discontent with Diem exploded into mass protest in Huế during the summer of 1963 when nine Buddhists died at the hand of Diem's army and police on Vesak, the birthday of Gautama Buddha. In May 1963, a law against the flying of religious flags was selectively invoked; the Buddhist flag was banned from display on Vesak while the Vatican flag was displayed to celebrate the anniversary of the consecration of Archbishop Ngo Dinh Thuc, Diem's brother. 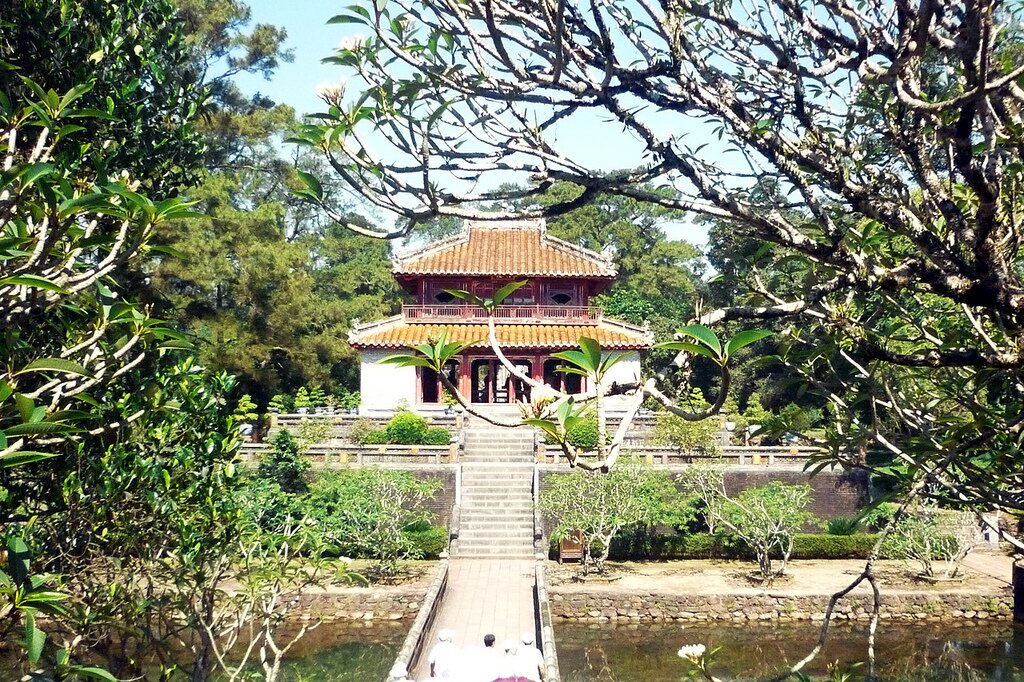 The Buddhists defied the ban and a protest that began with a march starting from Tu Dam Pagoda to the government broadcasting station was ended when government forces opened fire. As a result, Buddhist protests were held across the country and steadily grew in size, asking for the signing of a Joint Communiqué to end religious inequality. Thien Mu Pagoda was a major organizing point for the Buddhist movement and was often the location of hunger strikes, barricades and protests.

The temple also houses the Austin motor vehicle in which Thich Quang Duc was driven to his self-immolation in Saigon in 1963 against the Diem regime. It was the first of a series of self-immolations by members of the Buddhist clergy, which brought the plight of Buddhists to the attention of the international community. It is the end of the trip around pagoda which is one of Vietnam Popular Destinations.

Coming to Thien Mu Pagoda, travelers in Vietnam travel can choose to do many different things, like urn incense and pray for blessings, sit on the wall to observe the special Huong River, or walk around the pagoda to explore the garden or listen to the monks reciting the Buddhist scriptures, or watch them as they sweep the yard or go about their daily routines, for those images bring you to a peaceful feeling never achievable in the hustle and bustle of the daily life. Being one of Vietnam Popular Destinations, this place brings many interesting things as well as historic memories to tourists.