Bái Đính Pagoda (Chùa Bái Đính) is famous for its great size and imposingness and one of most Vietnam Popular Destinations. The pagoda will be also set more record for the owner of the most Arhat Statues in ASEAN with 500 Arhat statues made of stone and stand higher than human’s head. And I am heading to visit this place on this month with my family. How about you? Do you want to join with us?

Located behind a range of limestone mountains in Gia Sinh Commune, Gia Vien District, Ninh Định Province, the site with construction lying about in disorder and in the way, so it is difficult to imagine the beauty of this pagoda - one of Vietnam Popular Destinations as well as its solemn to a pagoda in the true sense of the word as the tradition. However, its great size and imposingness can be felt by anybody when visiting it one time. Its back leans against the Bai Dinh Mountain with the height of 200m.

The area for constructing Ba Dinh Pagoda is 80ha, which is located on the mass of “Bai Dinh Pagoda hallowed culture” belonging to Trang An Tourism Area. Currently, this mass is executing many items of Pagoda including Tam The (Past, Present and Future) Temple, Sanctuary and Bodhisatva Kwan Yin statue, Dharma Temple, Bell-tower, Three-door temple gate, and dormitory area for Buddhist monks, etc. In front of Pagoda valley, a hundred of  excavators, bulldozers and power-shovels are digging land and build up a dike to make a  huge semicircular lake, which will be taken water from the river crossing to create a landscape of “on shore and under boat” like the Yen Stream flowing under the foot of Hương Tích Pagoda.

The most important emphasizing point of these great religion works are still Tam The Temple and Dharma Temple. The area of two Temples up to 1.000m2 (area of the main sanctuary of traditional pagodas is maximum about 150m2 because it is limited by compartments - stipulated by the length of wood beam). The height of Dharma Temple is up to 22m, it contains four achieving record statues inside. 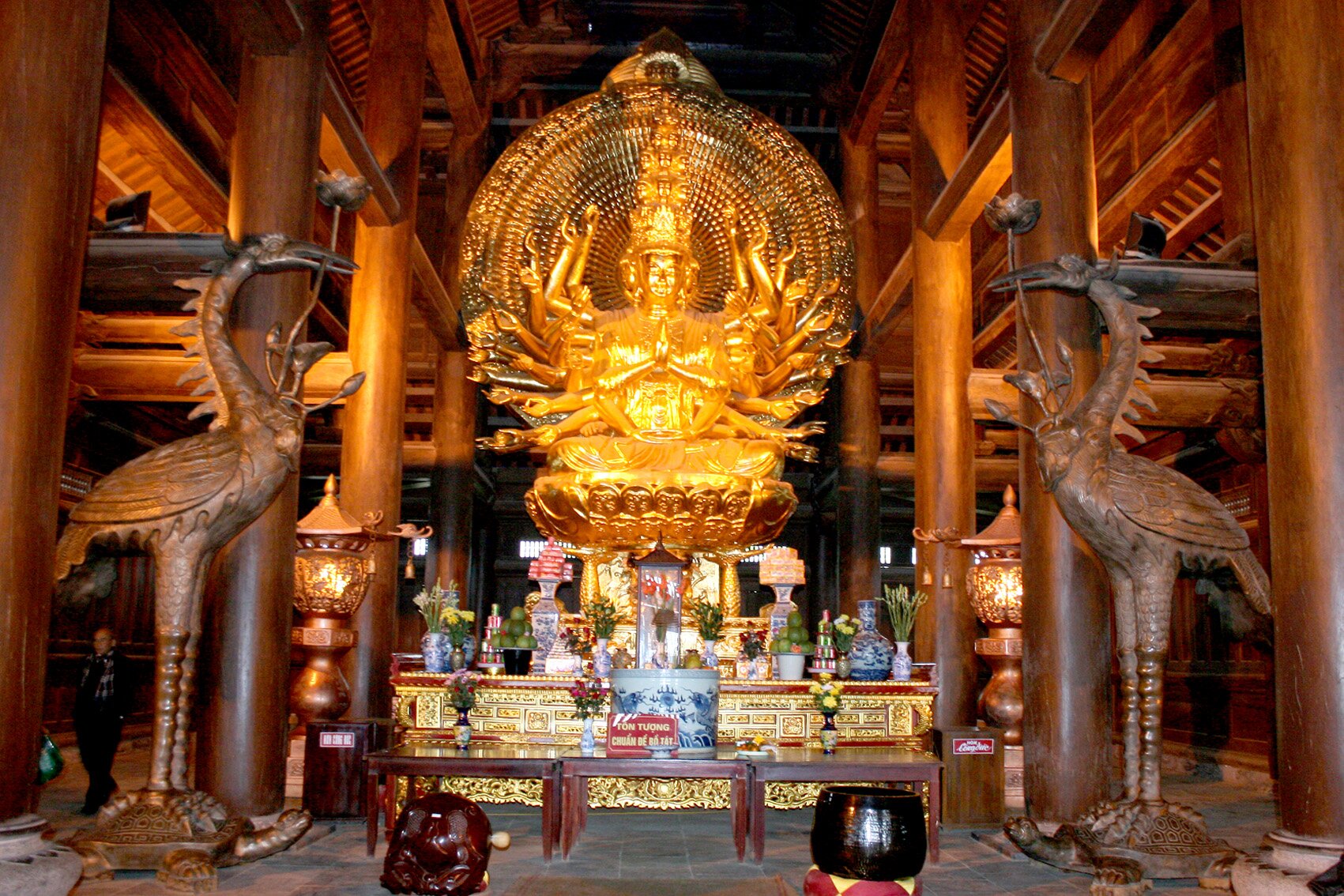 Four statues - three bronze Tam The statues and one Great Buddha Sakyamuni statue - are the pride of “Owners” of Bai Dinh pagoda. Each statue of Tam The weighs 50 tons, 12m high, Great Buddha Sakyamuni statue with 16m high and weighs 100 tons, which are casted by the pure bronze bought from Russian, casted and installed by the famous Artisans of casting bronze statue in Y Yen, Nam Dinh. A “great bell” with the weight of 60 tons was casted and located on the top of hill on the way come to the main sanctuary. The Great Bell is so big that it is estimated if wanting to sound the bell, it will need a big log of wood and four puller of wood to prod into the bell.

The astonishing one is the “collection” of 500 Arhat statues on the hill in the right of Dharma Temple. The 500 Arhat statues with the height of 2 or 3 m and carved by Ninh Binh stone. According to the supervisor for executing at the site, Mr. Nguyen Xuan Truong - investor and his collaborator came to China to learn and take the sample drawings of 500 Arhat’s legend and brought to home country for the painters, carvers to make the sample statue of gypsum, after that the craftsmen carved the statues again by monolithic green stone. People in Gia Vien District joked that: only carving enough these 500 Arhat statues, the villagers in Ninh Van’s stone craft village, Hoa Lu (neighbor district) have got enough jobs security during the past two years.

Though the construction of Bai Dinh Pagoda has not yet finished, the reputation of this new Pagoda was far-resounding comparing with other Vietnam Popular Destinations. The visitors received some information from the backstage “whisper in each other’s ears”, have come to burn incense before the bronze statues of Buddha which are still being covered by scaffolds.

While far from the large site 2km, if sharp-sighted the passers will see a humble three-door temple gate loacated next the roadside. Through the three-door temple gate, turn to the small path rather slope, go up to the top of mountain we will see the Bai Dinh Pagoda (old), full of green moss and quiet. There is virtually none knowing to a “Great Buddhist Pagoda” will be going to set the record of Asean being executed at the site over there.

To sum up, ecologically and historically rich, the Bai Dinh Pagoda Mountain was recognised as a cultural and historical heritage site in 1997. Bai Dinh Pagoda will become the largest religious tourist centre in Viet Nam upon completion in 2010 to celebrate the 1,000th anniversary of Thang Long - Hanoi. As great historical relics, Bai Dinh Pagoda cherishes both: enchanting scenery and deep history. Let us give you a chance to enjoy one more Vietnam Popular Destinations like this place. 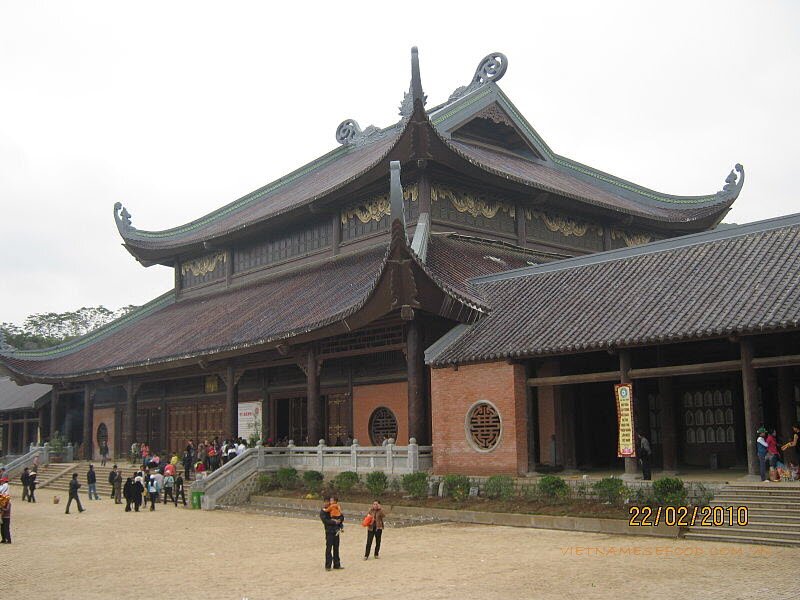