During your supposed time in Hanoi, it is highly suggested that the beautiful Trấn Quốc Pagoda – the oldest one among others in Hanoi, be added to your visiting list. This place is considered one of Vietnam Popular Destinations. So you should take your time to there. 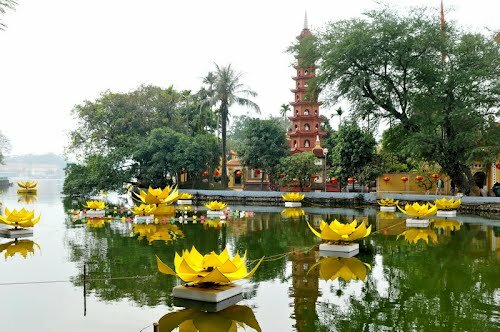 Chùa Trấn Quốc (or Trấn QuốcPagoda) is located beside the dazzling West Lake, on Thanh Nien Road, Hanoi. Particularly, it is seated on an island linked by a bridge to the causeway between the two most romantic lakes of Hanoi: West Lake and Truc Bach Lake (They are two famous Lake in Hanoi).

The construction of the pagoda started in 541 and was completed in 545 under the reign of King Ly Nam De (544-548) under its original name of Khai Quoc (National Founder). It was initially built on the bank of the Red River (then West Lake and the Red River met).

Until the early 17th century, under the reign of King Le Kinh Tong (1600-1618), the pagoda was moved to the Kim Ngu (Golden Fish) Islet due to the river bank crumbling and was renamed Tran Quoc (National Defence). 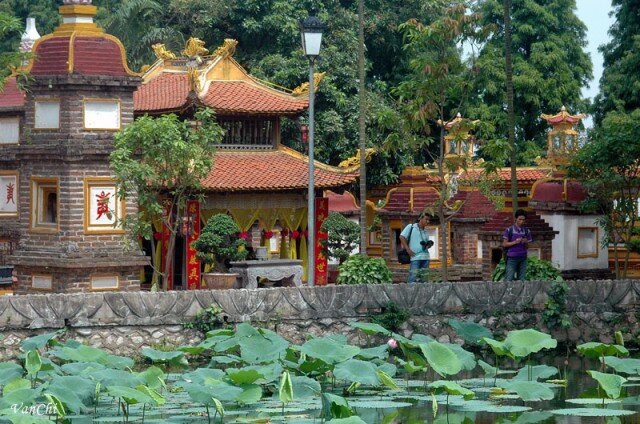 You might ask yourself why among a number of beautiful pagodas and Vietnam Popular Destinations in Hanoi, Tran Quoc pagoda should be visited. The reason derives from the fact that it is considered a cultural symbol of Vietnamese Buddhism partly for it is the oldest pagoda and situated in the center of the capital of Vietnam. More importantly, unlike other ordinary pagodas, Tran Quoc Pagoda was built in a very intricate way. Behind the worshipping shrine is the Buddhist trinity followed by corridors, ten shrines and the belfry. Inside the pagoda, there are many valuable statues, such as the red lac statue trimmed with gold of Sakyamouni Buddha's Parinirvana, which is a masterpiece of Vietnamese sculptural art, and lots of ancient stele, one of which was made in 1639 by Doctoral lau- Nguyen Xuan Chinh, recording the Pagoda's history.

There is no one who has visited this significant pagoda of Hanoi does not take interest in its special and intricate style of architecture dated centuries ago. Please come here to feel one of Vietnam Popular Destinations by yourself!

It must be said that the island and pagoda provide a beautiful backdrop, particularly when viewed at sunset. Standing at one end of Thanh Nien Road, one can see the towers of the pagoda rising above the lake’s surface. In the pagoda’s garden stands a Bồ Đề (Bodhi) tree, which is attached to a past story. The story tells that in 1959, on his visit to Vietnam, Indian Prime Minister RazendiaPrasat offered the pagoda a Bodhi tree as a gift. The plant was grafted from the holy Bodhi tree where Sakyamuni sat in zen (meditation) position and achieved enlightenment in India 25 centuries ago. Now the Bodhi tree is easily recognizable from its heart-shaped leaves, taken from a cutting of its original tree. Today, the trees are still and luxuriant and it isshading over part of the pagoda's yard. 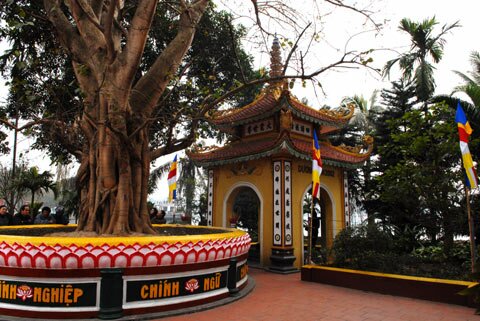 To sum up, these days, Tran Quoc Pagoda, as a religious relic with spectacular ­surrounding scenery, is a favorite stop-over of so many foreign visitors and pilgrims. There is one thing you should remember that the pagoda is open daily and visitors must be decently attired; long trousers are required for men. It is common restricted to any religious Vietnam Popular Destinations. Hope you have a fantastic and great tour in Vietnam, especially this place. 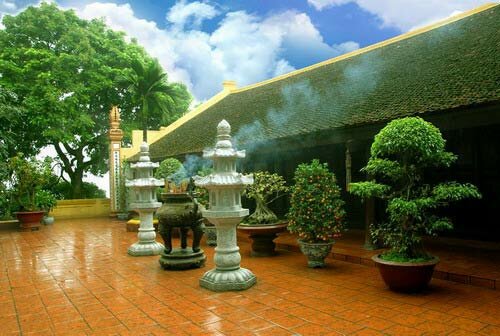