Bút Tháp Pagoda (Chùa Bút Tháp) has the pen name of Ninh Phuc Tu. It is located in But Thap hamlet, Dinh To commune, Thuan Thanh district, Bac Ninh province. This is a quite untouched pagoda and it has a big architecture scale of North Delta. This place now is considered as one of Vietnam Popular Destinations. 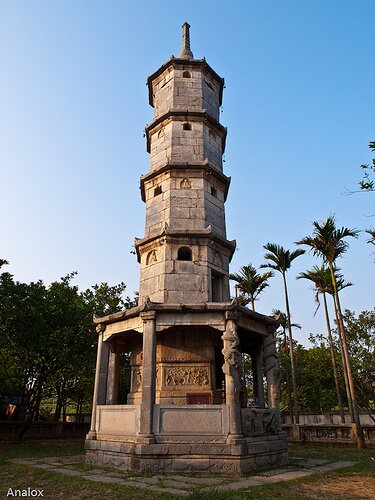 According to the book of Ha Bac monograph, the pagoda was built in Tran Thanh Tong king time.  Huyen Quang monk was a nun in this pagoda. He had the stone tower of 9 storey built with the lotus decorated (this tower is not available until today). Until 17th century, the pagoda is famous for the nun of superior Buddhist monk named Chuyet Chuyet (citizen of Fujianprovince of China). In 1644, the nun passed away and titled to be a great by the king. 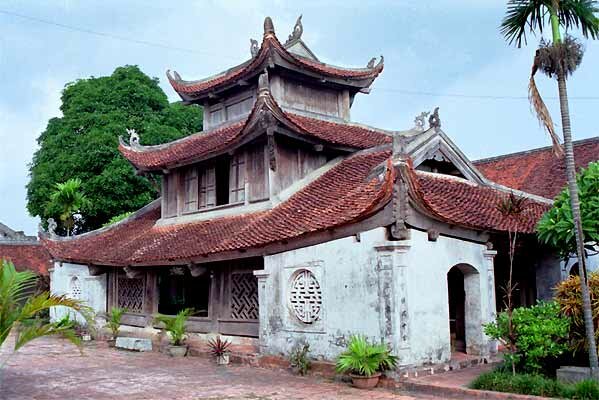 Differently with other Vietnam Popular Destinations, the architecture of the pagoda is mainly the internal attack with outside support style. All the monuments face the South, traditional architecture of the Vietnamese. The pagoda is balanced in the centre area but very natural in the surrounding area. The centre area includes eight houses which are set in an axis which are three gates entrance, bell tower, forecourt, upper palace, Tich Thien Am palace, middle house, worshiping palace, and back of a mansion.

There are two lines of stele house in the lobby and it runs along the length of the pagoda. At the left side and at the back of the lobby, there is a five-room house which is used for the worshipping place of the Buddhist priest Chuyet Chuyet, Minh Hanh. There are towers beside this house which are the tomb of the nun, Bao Nghiem tower, Ton Duc tower, Tam Hoa tower, Ni Chauotwer. The architecture of But Thap is also deeply marked by Chinese which are typically the stone bridge and Bao Nghiem tower. 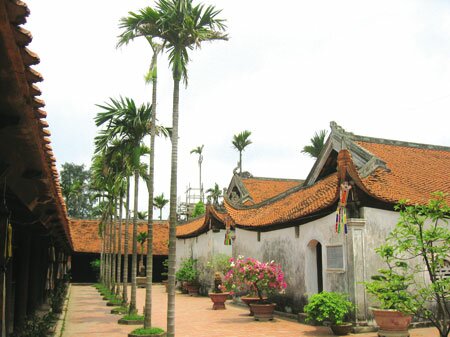 In the lobby around the upper palace, there are many carving pictures of wood and stone. There are totally 51 carving pictures with many different topics with the generalization in the material, style and it is generalized in terms of time. The carving patterns are lively with the artistry characteristic with the topics of trees, flowers, birds, animals. 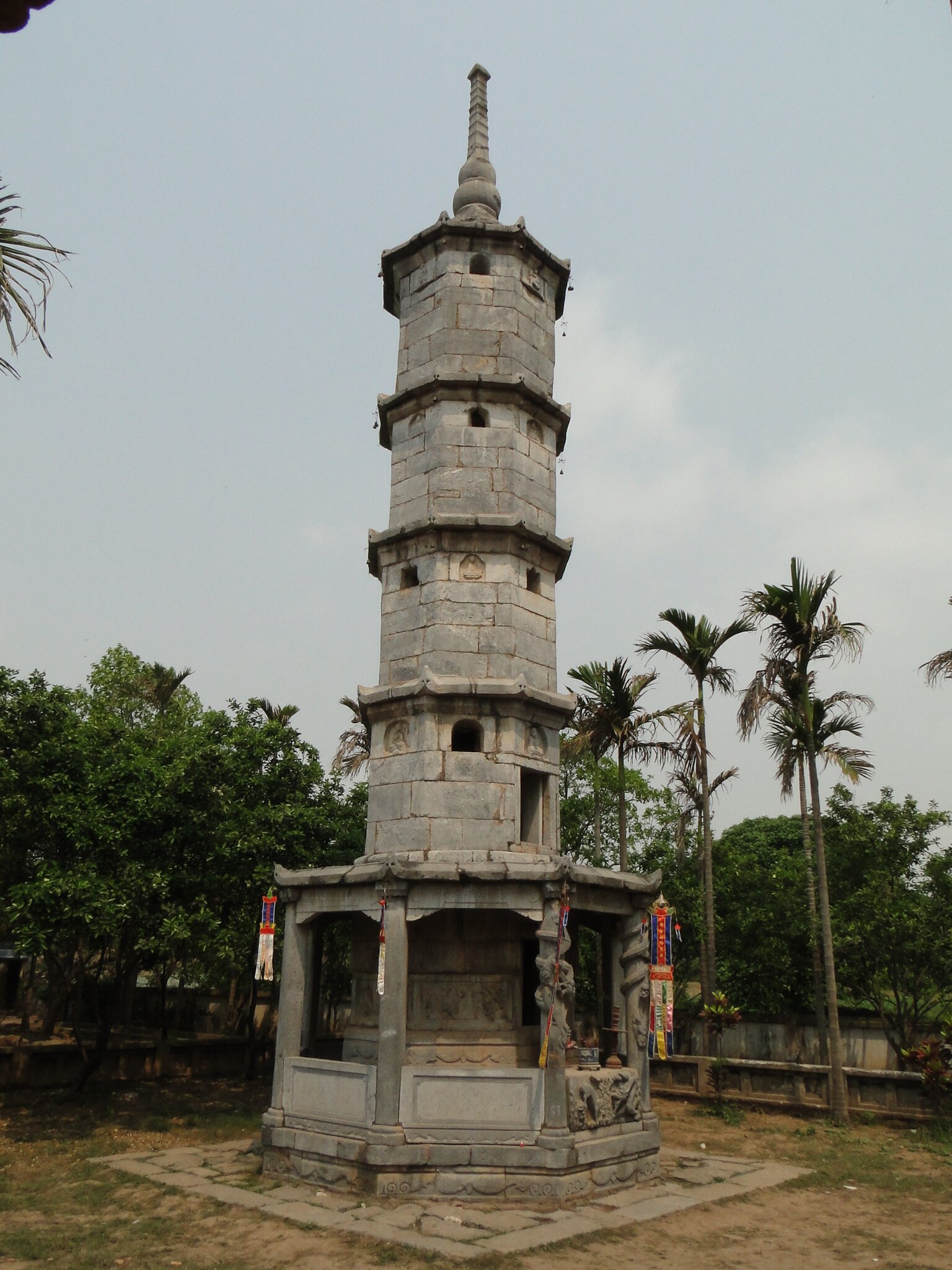 But Thap is one of the little numbers of Vietnam Popular Destinations which remains the ancient architecture. There are many architect students coming here for internship. Visitors come here would come to the history and seems like come to the sparkling Buddhist land with the brown statues of Buddha to the architectures of tower, yard, lobby, etc… 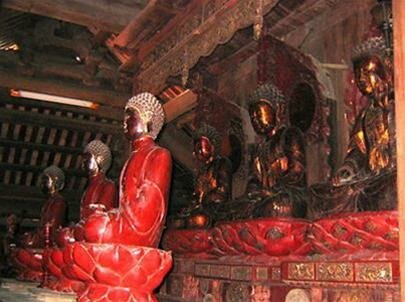 Bao Nghiem tower looks like a giant pen which upraises towards the sky. This is the place to worship Chuyet Chuyet great priest. The tower is a five storey block with a part of the peak made from blue marble. There are five small bells in the corners of five stores. There is a round area inside the tower with the diameter of 2.29m. The last layer of the tower has 13 carving stone pictures with the main subjects of animals.

The sculpture of Bodhisattva Kuan-yin of thousands of eyes and hands is a unique masterpiece in statue of Buddha and the art of sculpturing. The statue is placed in the middle room of the pagoda which is very mysterious. Overall looking, the statue seems like spreading the aureoles around from the centre point. The statue of Kuan-yin is supposed to be the most mysterious language to stand out the philosophy of Buddhism with the portraying language and place in the But Thap with time and seniority, all make it mysterious. 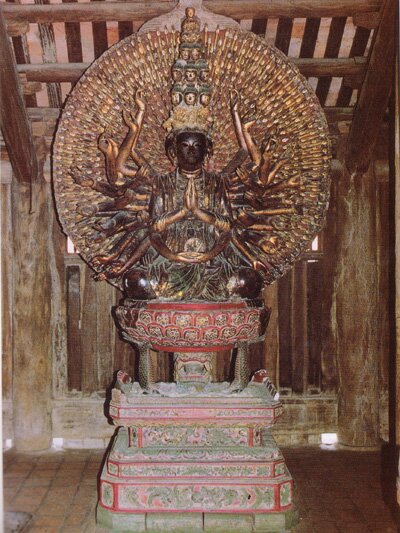 There is a wood tower in Tich Thien Am with 9 storeys, 8 sides, and it could be turned around an axis. It is carved with Buddha statues and folk scene in the Buddhism tale.

In the middle of upper palace and Tich Thien Am is a bridge stone a crossing the pond of lotus which is pure. Standing in the bridge, we could see the unique beauties of the pagoda. The bridge includes three parts with marble sliced floor and sophisticated carving pictures beside the bridge. 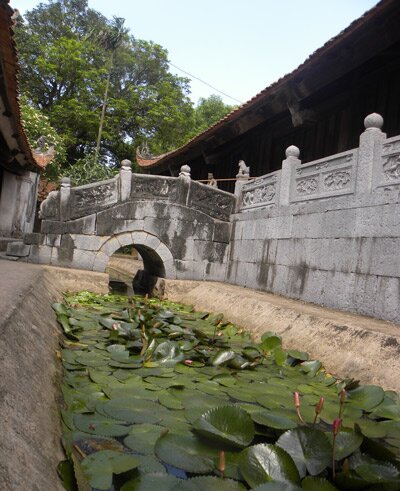 But Thap Pagoda is the harmonically integrated between the architects and nature. People of the past knew how to combine the landscape of the whole area to make that assimilation. There is theDuongRiveron the left of But Thap pagoda, Tam Dao Mountain and Phat Tich Mountain embrace it in the right. From the distance, we would see the center location of the sky and earth.

But Thap pagoda has still contained much ancient beauty from many years. Each spring, there is the festival of But Thap pagoda with the happiness and reverence of the Buddhist followers and local people. The pagoda has been preserved and embellished to be worth being one of Vietnam Popular Destinations in the North Delta. Make sure you will not miss to visit this pagoda when have a chance to go to this province. Have an interesting trip with your family and friends in my beautiful country.