From many amazing Vietnam Popular Destinations, today, I will introduce one of traditional places in Hanoi Capital for all you guys. Quán Thánh Temple (Đền Quán Thánh) is located at the crossroads of Thanh Nien Street and QuanThanh Street, near West Lake, Ba Dinh District, Ha Noi. Built during the reign of King Ly Thai To (1010-1028) and renovated many times, the temple is also called Tran Vu temple, since it is dedicated to HuyenThien Tran Vu (Guardian of the North of the Country). QuanThanh temple is an important historical and cultural place in Hanoi.

According to the legend, Tran Vu is a figure who helped King An Duong Vuong chase away demons during the construction of Co loa Citadel. The temple first existed in the south of the To Lich River (1160) but then was moved to the North-west of the capital (the present site) (1474). It is one of the “Thang Long Tu Tran” which honours the Holly Figures guarding at four main directions (East – West – south – North) of the ancient Thang Long citadel.

Quan Thanh temple attracts visitors for its famous special and beautiful structure and religious cultural place.In the past, it raised question whether the legend of this place is true or not. There are many talks that this place should be one legendary place in Vietnam. However someone said that it is just a regular temple that visitors come to visit. It is now considered one of the Vietnam Popular Destinations after many discussions. 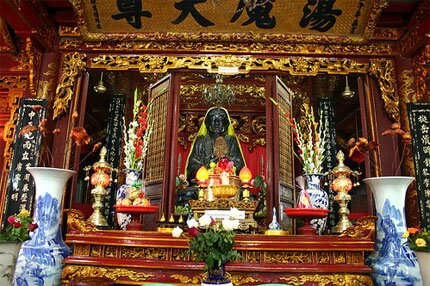 From the temple’s gate, you will see a majestic 3-door entrance which was built on large stones with a bell tower on its top. It is typically structure of many Vietnam Popular Destinations. The tiger standing in front of the temple is considered to be the guard of the temple. Passing through the gate is a large yard shaded by a banyan tree with a basin of goldfish and a rock work. Going inside the temple, visitors will be caught by the giant black bronze statue of Huyen Thien Tran Vu which is 3.72 in height and four tons in weight.

The statue appears as a sitting Taoist hermit, the left hand passes magic and the right hand holds a sword shrouded by a snake propping against the back of a tortoise. This is a special sculpture with a refined casting technique of Vietnamese people in the 17th century. Inside the temple, there is also a statue of “Old Trong” who made the statue of Saint Tran Vu. Old Trong’s students cast it to express their gratitude to the teacher when he died. 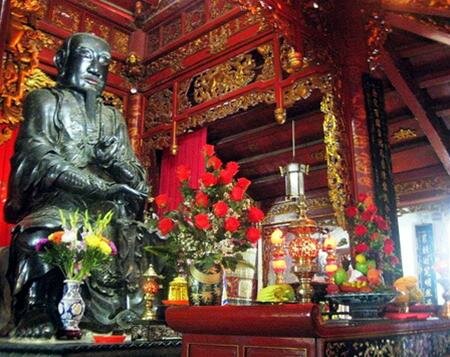 Quan Thanh temple is also renowned for the woodcarving. Many wooden structures in the temple were carved skillfully with different shapes and patterns such as four sacred animals, fish, fir trees, bamboo trees, flower baskets, swords and daily activities on the heaven and the earth. They are really a beautiful and fantastic combination.

This place also has one of great secret that many tourists and researchers have been looking for it. If you are a person who interested on discovering, you can come there to explore it. I think it could be excited as fun. It is now the end of the tour of the trip around one of more Vietnam Popular Destinations.

To sum up,religious visitors often come to Quan Thanh temple at the Lunar New Year and on the first and fifteen day of the lunar month. The purpose is to worship and pray for health, luck and happiness. Visitors also can enjoy the spacious and charming landscapes here, relax and find out the ancient and romantic beauty of Hanoi in the past and now. Through this article, I hope you may like this place as well as other Vietnam Popular Destinations. And have an interesting trip in my beautiful country with family and friends.