The way from the cave’s mouth to the insider has 120 anti-plastered rocky footsteps. There are forest trees at two sides greeting visitors with their warm welcome. According to Feng Shui theory, Hương Tích Cave (Đông Hương Tích) is the mouth of a big Dragon, Dun Gao Mountain is the dragon’s tongue and it is one of Vietnam Popular Destinations. In the old days, people who wanted to go from the cave’s mouth to the cave’s ground must walk on two parallel ironwood bridges, named “White Lotus Bridge” in the deep cave, cross a lotus pond. 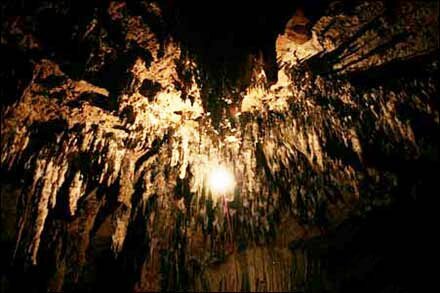 According to Phan Huy Chu's geographic book, "Huong Tich Mountain is on the west of Tuyet Son Mountain, along the flume and going up stream, after climbing up for many layers of the mountain we will reach the cavern. The nature's scene here is like being made by the holy being, very strangely and skillfully, thus it is the most beautiful cavern in the Southern Sea. It is said that the Bodhisattva took control of this pagoda with the sacred staff. Each spring, people from everywhere come here to pray and show their worship. It is the main reason why it becomes one of Vietnam Popular Destinations. 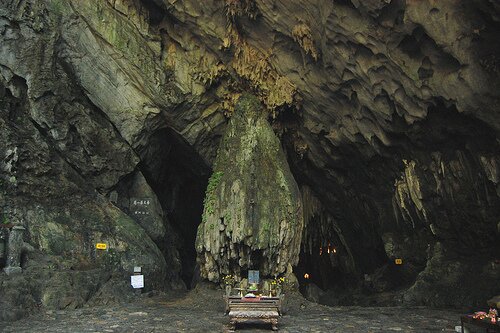 Huong Tich Mountain is on the height of more than 900 meters. The entrance was made manually in the early time by local residents of Yen Vi village. Though the way was still bendy and dipped, it is much easier for visitors to walk on.
The beauty of Huong Tich Mountain also includes the “rocky cloud ladder” road. More than 2000-meter road from Tro wharf (Suoi wharf also) is neither too far nor too high, but still it troubles the newcomers. It’s not easy at all to get into Buddha’s place if from the bottom of your heart you don’t want to get there. 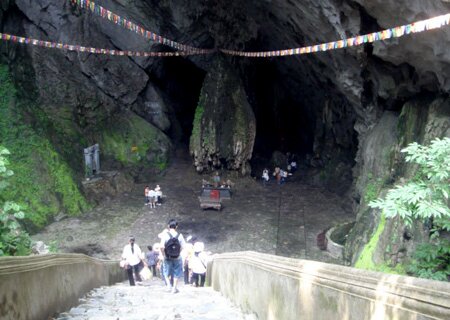 Getting the cave’s vault, visitors realize they are standing among many mountains, down in the mountain’s foot is a deep valley: “I stand alone in the towering mountain” The cave’s vault was made by green stones in the year of Dinh Mao (1927), though it’s not so monumental, it suggests this land has supernatural power. The way from the cave’s mouth to the insider has 120 anti-plastered rocky footsteps. There are forest trees at two sides greeting visitors with their warm welcome. 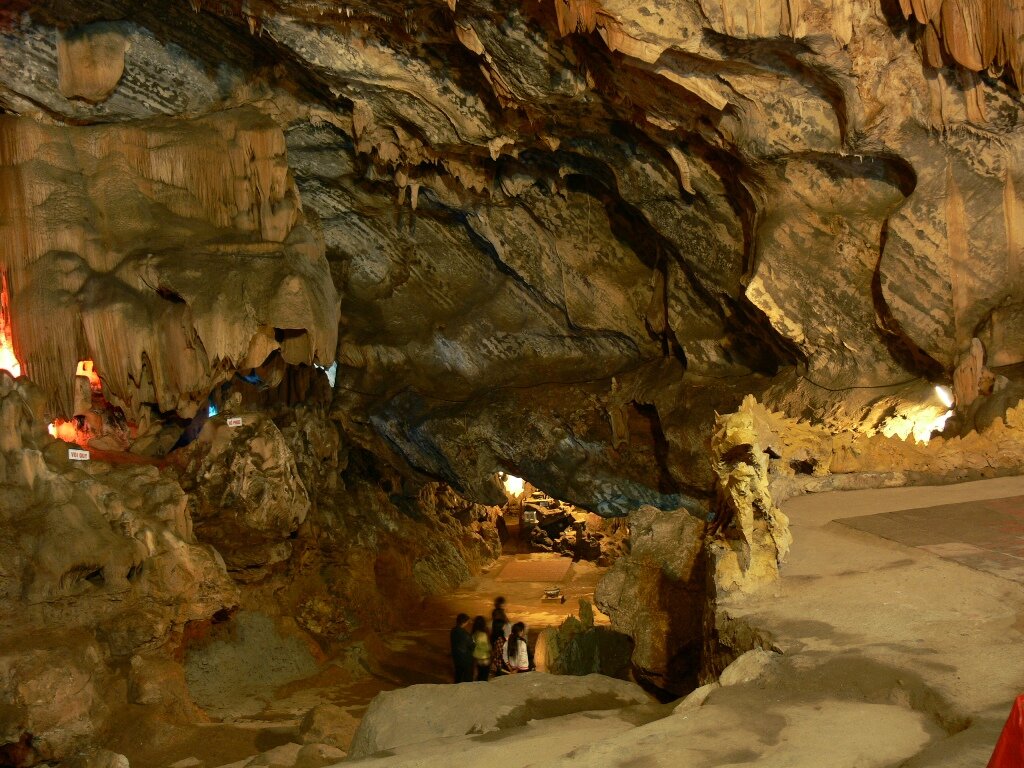 According to Feng Shui theory, Huong Tich cave is the mouth of a big Dragon; Dun Gao Mountain is the dragon’s tongue. In the old days, people who wanted to go from the cave’s mouth to the cave’s ground must walk on two parallel ironwood bridges, named “White Lotus Bridge” in the deep cave, cross a lotus pond. 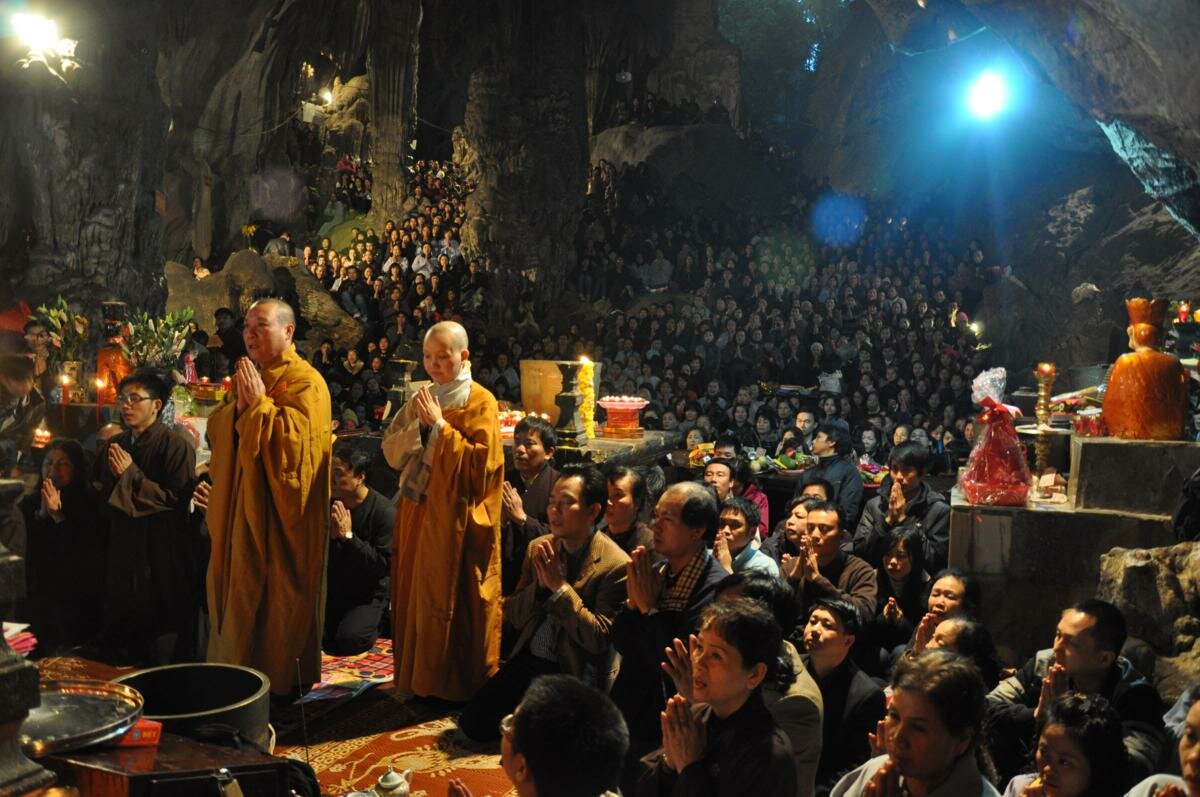 In 1776, Mr. Vu Dinh Trac – Thiem marquis and his wife named Nguyen Thi Tan, voluntarily rebuilt Bach Lien Bridge with “house up, bridge down” style. The bridge was made by ironwood and the house’s vault was made by shoes’- head- shape tiles. 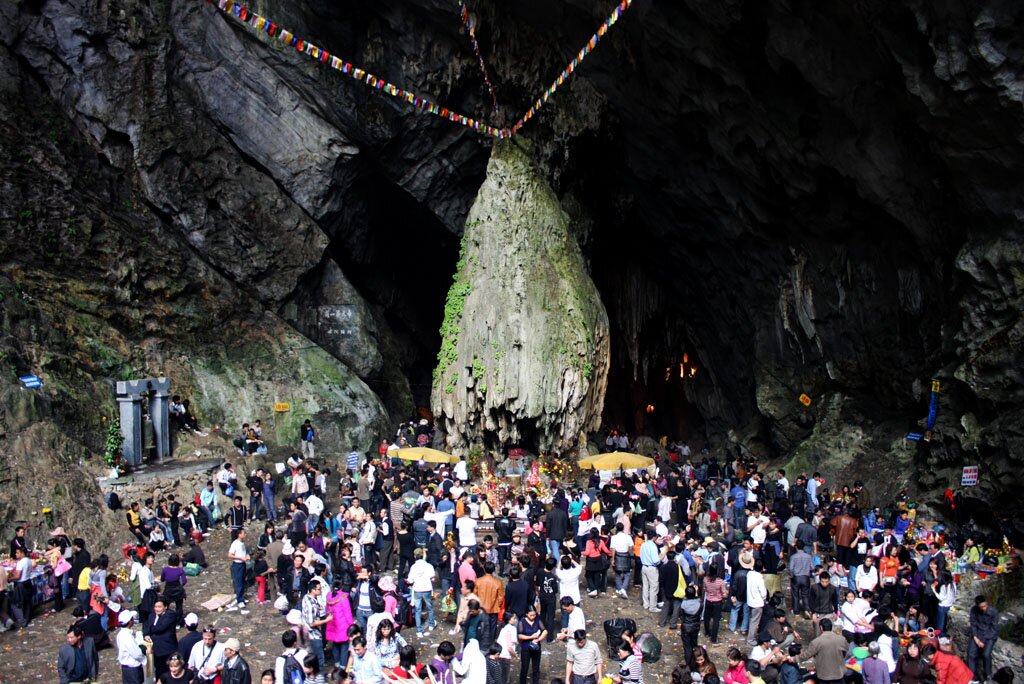 There are two carved phoenix statues at two bridge’s sides; the bridge’s body was made by thick planks. “Water under Bach Bridge is so pure…” (Vu Pham Han’s poem) Two White Lotus Bridges and Lotus Pond cave, however, were destroyed in 1936 as the instruction of mandarins and the prevailing president of Ha Tay province. In the entranceway, five large Chinese characters “The First Class Cave in Vietnam” were carved by Lord Trinh Sam when he traveled to Son Nam in the third lunar month of the year of Canh Dan (1770).

In the cave, there are many stalactites at different sizes, called by different names based on their shapes by ancient local residents: “Nine dragons compete for jewels” (as on the ceiling, nice stalactites hanging down look like nine dragons fight for a rock), Rice Mound, Gold Mound, Silver Mound, Con Trau (Buffalo), Con Lon (Pig), Pond of Water-fern, broad flat drying baskets of silkworms and cocoon, Boy Stone, Girl Stone and even Mother’s Milk Stone where water dropped as slowly as counting the time. Similar with other Vietnam Popular Destinations, visitor coming them wants to catch one to pray for luckiness. Felt moved, poetry wrote:

“Nothing can compare to Mother’s milk
Nourishing the child for years and wishing he will be mature
She was weather-beaten, all days and nights
Keeping her child warm in four seasons..." 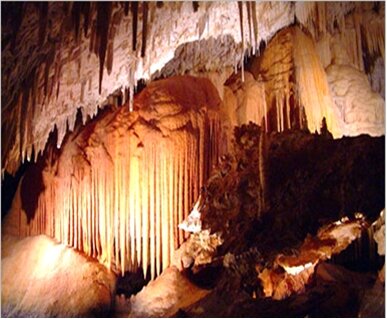 The stalactites which are have their own souls conveying people’s dreams and expectations. What a splendid enormous wonder. Beside natural creatures, there are things made by ancient people since the old days: Pedestal in lotus shape, four corners are four people wearing loin-clothes, their rising hands bear a big stone, showing their strengths to time. This is the end of the tour visiting one more Vietnam Popular Destinations, I hope you like it.