The dry season lasts from December to April next year. The rainy season is between May and November. Annual average temperature is 27oC.

Tien Giang has rich aquatic supply including freshwater fish, brackish fish, and saltwater fish. Some of special fruits are Trung Luong plum, Vinh Kim star-apple, Cai Be guava, sweet mango, rambutan, and thick-skinned orange. Many fruits, vegetable, and other products are anchored on lively Cai Be Floating Market and Tan Phong Island, along Tien Giang River. Visitors also like to picking fruit, enjoy them and experience the life of Mekong River Delta community in orchards of Thoi Son Island.

Every tourist come to Tien Giang will not forget one of best Vietnamese dish there. It is My Tho noodles. You may know Vietnam has variety of noodles; however My Tho noodles is different with other traditional noodles. Instead of using salad, herbs or vinegar like other, My Tho noodles use only lemon, chili and soya bean sauce. Moreover, the making of delicious of this dish depends on the clever and ingenious hand of cookers. They collect carefully from rice to make noodles to ingredients to make broth. Since 1950s, the name of this dish is well-known around Southern Vietnam. 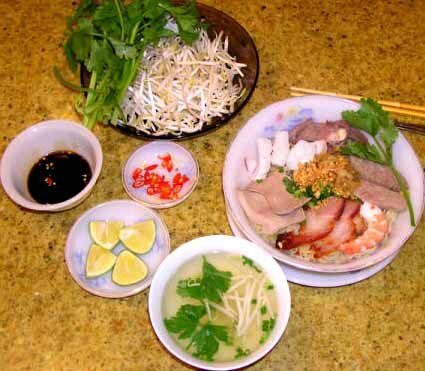